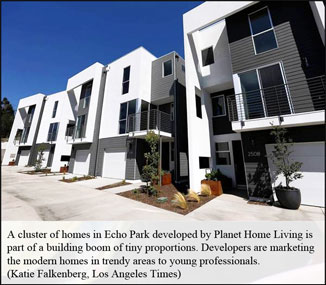 Just north of downtown Los Angeles, skinny homes on tiny lots are sprouting from the hillsides — a building boom of miniature proportions.

The rectangular structures come in clusters of six or 15, or even 70, and developers are racing to build them in trendy Silver Lake and Echo Park. They're eyeing younger home buyers who crave hip cafes and proximity to work but don't want a sky-high condo or a Craftsman bungalow.

The so-called small-lot homes speak to a growing desire for a more compact and walkable Los Angeles, while still clinging to the single-family ideal that spread outward from downtown over the last century. The homes often have a small patio or roof deck but no backyard. The buyer owns little land beyond what sits beneath the house, a tiny footprint that cuts the cost in pricey neighborhoods.

"It's sort of the iPhone or Prius of homes," said Christian Návar, co-founder of L.A. architecture firm Modative, which designs the projects and hired five more employees this year to handle the boom.

In the next 18 months, builders will break ground on roughly 250 small-lot homes in Silver Lake, Echo Park and northeast L.A., said Chris Gomez-Ortigoza, a land broker specializing in the deals. And the trend is spreading to other neighborhoods including Studio City, North Hollywood and Toluca Lake. The homes typically fetch between $500,000 and $800,000.

Robert Kim is among the buyers whom developers are looking to attract. The 35-year-old had grown tired of his 16-mile commute from Brentwood to his job at the historic Park Plaza Hotel, across from MacArthur Park. So Kim began looking for a new home, finally settling on an airy, modern Echo Park three-bedroom for $669,000 instead of a "fixer-upper."

"I wouldn't have the time or patience to do that," he said.

When Kim moves into his new small-lot home next month, he'll cut his commute to three miles and avoid the Santa Monica and San Diego freeways during rush hour.

The Echo Park project was developed by Planet Home Living of Newport Beach. Seven of what will soon be fifteen homes, priced between $669,900 and $768,394, have already sold. And the developer plans to break ground on about 45 more small-lot homes in the next 18 months in Silver Lake and Echo Park, said Michael Marini, Planet Home's chief executive.

"I love this area," Marini said, shortly after lunching with his wife at an Echo Park restaurant known for its small plates of sustainably grown produce and meat.

Builders usually pack in two or three bedrooms, stacked in two or three stories. Size typically ranges from 1,000 to 2,000 square feet, allowing for a spacious living room and kitchen on an open floor plan.

The homes are clustered in mini-communities, a modern twist on L.A.'s famed bungalow courts. There are no shared walls, but neighbors are separated by mere inches. Developers enclose the miniature gap between the homes to keep out water and unwanted critters, giving the impression of town houses.

Such projects grow from a 2005 Los Angeles city ordinance that aimed to add more affordable for-sale housing — at least by L.A. standards — in densely packed neighborhoods. It lets developers carve up a lot zoned for multi-family use into small single-family plots, allowing multiple homes with separate foundations. The regulations chopped the minimum single-family lot size in those areas from 5,000 square feet to 600 square feet. The city of Glendale is now considering a similar ordinance.

Unlike condo owners, residents of small-lot homes own a plot of land, which makes financing easier for both builders and home buyers. And although small-lot owners do pay a monthly fee for common area upkeep, it's typically much less than homeowners' association dues at condo developments.

Návar, of the architecture firm Modative, sees the compact homes as a chance to inject more homeowners into walkable neighborhoods, who will in turn support more businesses. Their popularity, he said, is evidence of a younger generation that wants to live more efficiently.

"This isn't your parents' house," he said, seated in Modative's office in the Helms Bakery complex.

In Silver Lake, developer Trumark Homes hopes to break ground this summer on 70 small-lot, three-story homes with no backyards, most with rooftop decks. Trumark plans to sell them early next year for between $575,000 and $635,000.

"It's an attainable price point for the young urban buyer," Trumark partner Jason Kliewer said, adding that the company is planning an additional 18 small-lot homes across the street.

Návar's firm has designed most of its small-lot projects in a strip of Los Angeles near the Culver City art district. Jeff Morrical and Phil Olson, both 31, moved to a three-story small-lot home off La Cienega Boulevard in January, after deciding against "the romanticism" of rehabbing an older property. They paid $650,000 for the Modative-designed property within walking distance of art galleries.